A mantra is a sacred utterance, a numinous sound, a syllable, word or phonemes, or group of words in Sanskrit, Pali and other languages believed to have religious, magical or spiritual powers.

While the mantra Om Mani Padme Hum, is a Buddhist Mantra written in Tibetan Script with Mandala Style.

The earliest mantras were composed in Vedic Sanskrit in India and are at least 3500 years old.

At its simplest, the word ॐ (Aum, Om) serves as a mantra, it is believed to be the first sound which was originated on earth. Aum sound when produced creates a reverberation in the body which helps the body and mind to be calm.

In more sophisticated forms, mantras are melodic phrases with spiritual interpretations such as a human longing for truth, reality, light, immortality, peace, love, knowledge, and action.

Some mantras without literal meaning are musically uplifting and spiritually meaningful.

While within Zoroastrianism,Taoism, Christianity, and other spiritual traditions, similar hymns, antiphons, chants, compositions, and concepts are observed.

Within the school of tantra, mantras are considered to be of sacred origin and formula, as they are considered deeply personal rituals, effective only after initiation.

Wheras in Hinduism, Buddhism, Jainism or Sikhism, the practioner is not required to be initiated before perfing.

The word Chakra derives its origin from the Sanskrit language as it has a meaning likened to that of a wheel within the ancient India languages.

Chakras were used as various forms of energy. It is the focal point of the human body used in meditation practice.

The human body has 7 main chakras wherby they can be activated by mantras and meditation.

The human body has 7 main energy centers. These major energy centers are called chakras. Chakras run from head to the bottom of the spine.

The 7 main chakras are:

Knowing how to chant mantras to activate chakras?

To activate your chakras mantras must be chanted correctly. To chant the mantras for each chakras use your natural voice, do not chant mantras in high or low pitch.

Examples of mantras and their seed sounds.

Chant ‘LAM’ for the Root Chakra. This chakra opens up your prosperity, belongings, and feeling of security. If you feel low energy then you can chant the ‘LAM’ mantra.

VAM is a cleansing mantra for sacral chakra. This chakra is related to sexuality, sensuality, and desire for pleasure. Chant ‘VAM’ to open up this chakra.

Heart chakra is associated with love. If you are not feeling loving or experiencing difficulties in your relationship you should chant the ‘YAM’ mantra.

This chakra is related to your physical and spiritual voice. Chanting mantras and breathing exercises can enhance the power of this chakra.

This chakra lies in the center of your forehead. Chant OM or AUM mantra to open up this chakra. Third eye chakra is associated with awareness and guidance.

Crown chakra is related to the spiritual connection. This chakra is located little above the top of your head.

Note how the seed sounds chanted for each chakra have the tone AM or MA inserted into them.

Perhaps referring to the third tone within our solfeggio scale, the third chakra, the solar system and the dawn or morning, as In A.M.

Magic, encompassing the subgenres of illusion, stage magic, and close up magic, among others, is a performing art in which audiences are entertained by tricks, effects, or illusions of seemingly impossible feats, using natural means.

It is to be distinguished from paranormal magic which are effects claimed to be created through supernatural means.

While it is one of the oldest performing arts in the world. 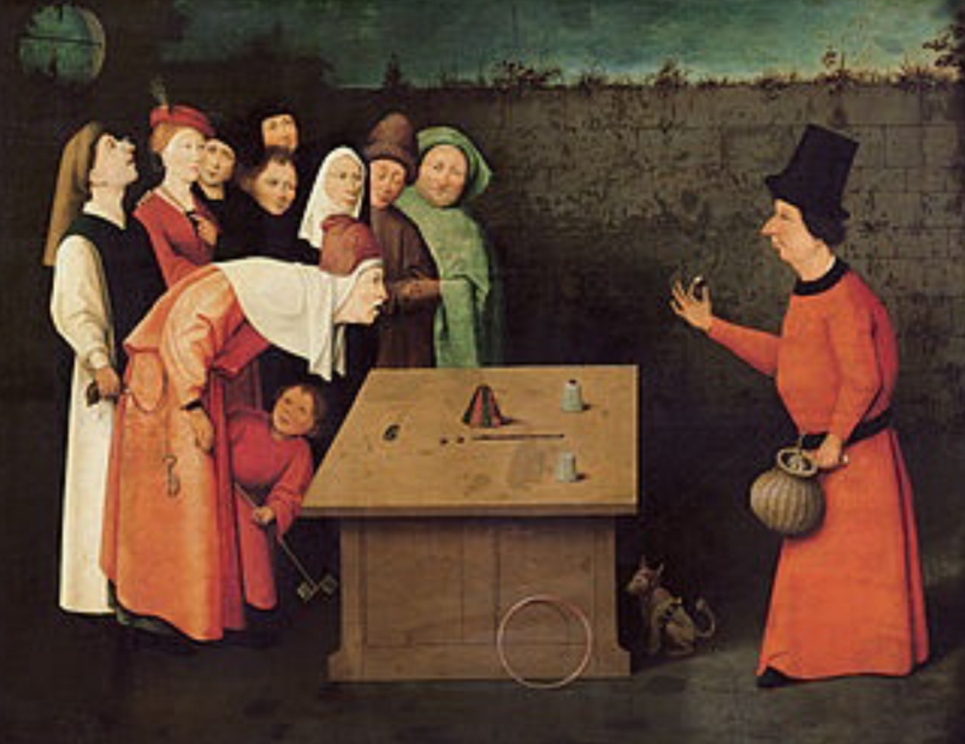 Notice how the man in the back row steals another man’s purse while applying misdirection by looking at the sky or solar system. The artist even misdirects the viewer from the thief by drawing the viewer to the magician.

In the late 19th and early 20th centuries, magicians such as Maskelyne and Devant, Howard Thurston, Harry Kellar, and Harry Houdini achieved widespread commercial success during what has become known as “the Golden Age of Magic”.

The art of Magick or magike, is defined as the “art of influencing or predicting events and producing marvels using hidden natural forces,” also “supernatural art,” especially the art of controlling the actions of spiritual or superhuman beings;

Old English wiccecræft (witch); was displaced as a transferred sense of “legerdemain, an optical illusion, from the 1800‘s.

While the term drycræft, from dry “magician,” possibly derives its origin from the Irish drui “priest or magician” (Druid).

Natural magic in the Middle Ages was that which did not involve the agency of personal spirits; it was considered more or less legitimate, not sinful, and involved much that would be explained scientifically as the manipulation of natural forces.

While reading the book “the 6th sun 2012 – 2021” it’s interesting to observe how Indians in America describe awakening in terms of blossoming, within the Hindu faith in India awakening is depicted with images of flowers, like they were blossoming. These cultures have similar interpretations on the nature of spiritually even though they exist on different continents, there is a reason they’re both called Indians.

It is interesting to observe how within the Hindu culture a description of awakening emerges and portrays it in terms of flowers or lotus leaves opening up inside, how flowers are carnations, could an “incarnation” be an inward flower?

What would come from a dark era as in kali Yuga, only a white incarnation or flower.

When we reach the full heights of Satya Yuga, an era of light, there will come a dark incarnation and various shades and colours In between, as they say it’s all relative or connected.

The word “Dia” means light or day in Spanish and Portuguese and also God in Irish.

Wherein a belief did form that there once was an ancient link between Ireland and India and that the word “India” actually meant “one God”, “one light” or “one day”.

Believing that the word “Irish” has the same origin as the word “sri” or “rishi” in India.

Sharing of a recent dream, of two separate dreams in the one night, where both dreams had an elephant present.

Dreams of the same image are not had, therefor this dream is significant, as for the first time an image in the form of an elephant had appeared twice.

This elephant was towering above in the first dream and represented this enormous power inside.

Within the second dream the elephant was pushing a metal cage, but the cage was covered in bedclothes, which were to be removed.

The elephant was struggling to push this metal cage as there were too many sheets wrapped around it.

Dreaming of such imagery may represent an inability to wake up and get out of bed, that to access the full potential of power within, one must wake up early, get out of bed and take action.

In taking action sometimes it is meant by doing some anaerobic and aerobic exercises first instance in the morning, go for a walk, a run, lift some weights etc, action activates the solar plexus, the joy, the passion.

This image of the elephant would have links to the far east and its symbolism, whereby within older posts a suggestion was made that water represents the sacral and creative or sexual energy, therefor the imagery of the elephant who spends time in the water would represent celibacy and rising into the solar plexus above the waters.

Once action is taken in your life, through exercise you begin to start feeling more positive about life.

The solar plexus is represented by a flame or fire, so this is where the idea of Hell stems from or twin flames.

Notice in imagery in the Bible of Jesus being tempted by the devil, how Jesus not only fasts to rid himself of the devil, but that he is also taking action by climbing a mountain.

In the song “the climb” performed by Miley Cyrus, she sings the lyrics “it’s the climb”.

It’s not where you are going that is important nor the destination, it’s the climb, it’s the action you take…

After repeated action in your life you start to resonate at a more positive frequency as you feel happier in yourself, you find people like your vibe and want to be around you more often, this increased interaction brings new ideas and opportunities and it almost feels life the universe is in complete alignment with you.

This book is a celebration of erections across the world, in whatever shape or form the erection takes, whether it is a piece of architecture, an artwork, a temple etc.

Here is an explanation of why architectural and artistic erections are so important and why they have been celebrated and revered since time has begun.

This book also recounts poetic work, and poems and stories which are written about famous erections, across the world erections can be seen from obelisks and pyramids in ancient Egypt, to temples across Asia and India.

The book also endeavours to explain why the word erection refers to so many different things and why these different things with which the word refers to are linked in some way, it is also important to note which colours architects or artists use when trying to become more creative in creating their artistic or architectural erections.

Below is a link to an E-book version of the book.

This section explores the idea that Irish Bards and Druids have thought the world and much like we have monks in Christianity and Buddhism and Guru’s in India teaching the world today. In the ancient world were Bards who travelled the world teaching humanity.

While the book “Me Dia” postulates the belief that these cultures are this old for they all worship some sort of reptile in their pantheons, much like how we today worship the image of man as our God because man is the most dominant species on the planet right now.

These cultures worshipped the likes of the feathered serpent, like Quetzalcoatl and Kukulcan, for the reptile or serpent was the most dominant species 200 million years ago, at the edge of each continent in Pangaea is a dominant pyramid culture, these cultures are the Inca’s, Mayan’s, Aztec’s, and Ancient Egyptians.

It is interesting to note that when anagrams of these names are created some striking similarities with the Biblical names of Cain and Abal in Genesis present themselves, to elaborate the word Inca is an anagram of Cain, Ba’al who it is presumed is Osiris in ancient Egyptian pantheons, is the lord in the oldest Egyptian texts and therefor is Abal, Aztec or Estec becomes Setec or Satek which in ancient Egyptian is Seth.

After researching this and other mythologies some striking similarities could be seen, could the Bible be alluding to the idea that the beginning of mankind is with these pyramid cultures. 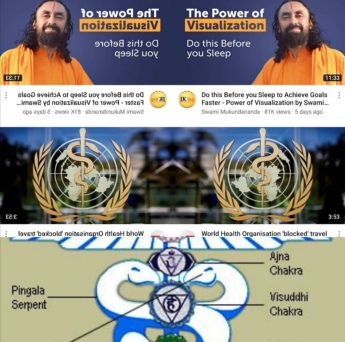 There is similar symbolism around the world, meaning the same thing.!

What if God doesn’t speak English?

This obelisk is an erection, it is a euphemism or metaphor for celibacy or sexual transmutation.